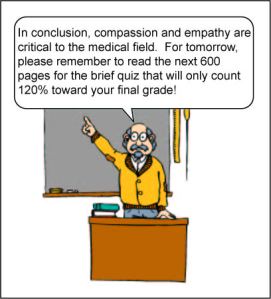 Many years ago, before the print era, people used memory techniques extensively, because there were no books.  Now, with books and Internet searches, it seems memory methods are less in favor, since we rely on the information in print, as extensions of our brains.  However, there still is much basic material that needs to be memorized.

Understanding should not be underrated as a memory method.  Why go to the trouble of trying to memorize isolated facts when the facts could easily be deduced from a simple rule or understanding of the issue?  For instance, muscles generally connect one bone to another across a joint.  Why memorize which muscles in a region lie more deeply when one can apply the simple logic that the shorter muscles lie deeper.  Thus the muscles that span 1 vertebra lie more deeply than those that span 2-4 vertebrae, which lie more deeply than those that span 5 or more.

A valuable way to learn a wealth of new medical terms is to recognize their Latin and Greek roots.

I remember the case of a nurse who had chronic uveitis (an inflammation of the middle layer of the eyeball), who was admitted with the inability to void.  She had been taking atropine eye drops, a parasympathetic inhibitor to keep the iris open, so that it would not stick to the lens.  Understanding that atropine eye drops can also enter the circulation systemically, where it could act on the bladder to impede bladder contraction, enabled the ophthalmologist to understand the cause of the inability to void and to correct the matter with an alternative approach to the uveitis.  It was an understanding of the drug’s potential effect, rather than a nonexistent caution in a drug reference that it may paralyze the bladder, that was helpful in resolving the issue.

In pharmacology, it can be cumbersome trying to learn one drug after another.  After a while they all tend to meld into one another as a confusing jumble.  However, there are principles that govern the effects of each class of drugs.  If you know the principles, there is no need to memorize the individual effects of each drug.  Each drug in the class will have effects that resemble those of the other drugs.  It may be better to learn the general principles and focus on those effects that distinguish one drug in the class from another, if we deem those effects important to memorize.

In memorizing the manifestations of a disease, it may help to emphasize any quality that is pathognomonic, namely that is specific to that disease.  For instance, neurologic weakness in a limb generally is either the type where there are overactive reflexes and no muscle atrophy, or the type that has underactive reflexes and significant muscle atrophy.  There is one disease, amyotrophic lateral sclerosis (Lou Gehrig’s Disease), where there is a combination of overactive reflexes and profound atrophy in the same muscles.  If you see that, you have virtually made the diagnosis of ALS.  Remembering a pathognomonic feature, a feature that distinguishes a condition from all others, can enable the clinician to quickly arrive at the diagnosis.  Similarly, remembering the specific effect of a drug that distinguishes it from others can help in choosing it as a drug of choice.

Other memory techniques will be discussed in the next posts.

View all posts by Stephen Goldberg